Campus waste management
and reduction through the years

Western Michigan University has a history of promoting recycling of plastic on campus. 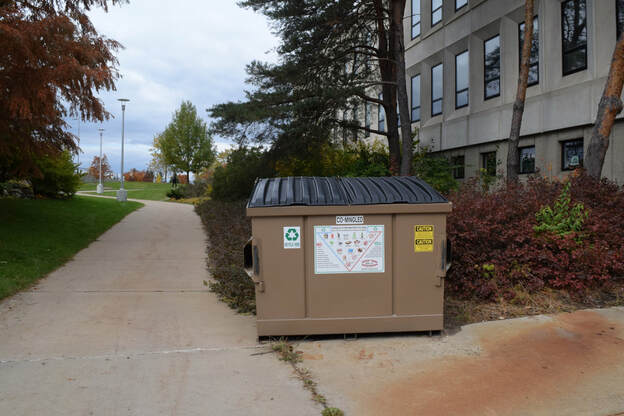 By Elissa Kedziorek
As environmental awareness has increased over time, Western Michigan University has worked over the last few decades to advance its waste management and reduction systems.

The recycling initiatives on WMU’s campus currently were not always a part of regular practice. Nik Kalyani, a WMU alum who first came to WMU in September 1987, said recycling, specifically with plastics, was virtually nonexistent.
“No, there was no provision for it,” Kalyani said. “It was just, everything went in the garbage.”

Kalyani said some paper was recycled, but not a substantial amount. He said he felt the focus was geared more toward air quality, than recycling. However, Kalyani said students returned bottles in order to get the deposit back.

It was not until 1989 that WMU developed a recycling coordinator position in order to create and implement a University-wide recycling program, according to the report “A History of Solid Waste Reduction at Western Michigan University.”

Before the creation of the recycling coordinator position at WMU, several students and student organizations worked to start a recycling program only to have it fail during scheduled semester breaks and because of a lack of available staffing, Spoelstra said.

Although initiatives and ideas have been created to cut down on waste, Jenna Otten, the sustainability chairperson for the Western Student Association, said students don’t always understand how to recycle.

“I think that recycling is really confusing to students,” Otten said. “Just because if you’re coming from different places, or other countries even, the recycling is different depending on where you live and where you are from.”

Otten said she has done a lot of recycling education with her sorority sisters and roommates and people don’t know what can and can’t be recycled.

“Plastic is even more confusing,” Otten said. “They have that recycle sign on them but that doesn’t necessarily mean that they can be recycled.”

Otten said she thinks students care about their waste and recycling, but they don’t have a great understanding about what to do about it.

Chase Latka, a WeSustain intern with the Office of Sustainability, disagreed. “Sustainability is a mixed bag of people because there are some people, like myself, who look at it as almost a religious dedication,” Latka said. “But then yes, there are also some students that don’t care whatsoever.”

As way to keep progressing sustainability efforts on campus, WMU is moving toward single-stream recycling, which will be easier for people to practice, Spoelstra said.


“So I just have one bigger container now where I put in the paper, cardboard, metal, plastic,” Spoelstra said. “And you can recycle many types of plastic with the right labels like the one, two, three, four, five, even maybe six now in the city of Kalamazoo.”

Otten said instead of recycling, it would be better to not use the items in the first place because you are already contributing to the waste system, as well as using energy in order to break the recyclable material down.
“Personally, I feel like recycling isn’t a very sustainable action,” Otten said. “Because if you’re recycling, you’ve already lost.”

Latka said in order to reduce plastics, and pollution in general, there needs an awareness that using those materials in the first place are an issue.

“I feel like a lot of people don't take sustainability seriously because they think the issues don't affect their lives at all, when in reality, it is their lives at risk,” Latka said. “Not recycling or reducing and reusing is literally causing their own doom.”