Sustainability has begun to move away from recycling,
toward reduction, but some companies voice other concerns.. 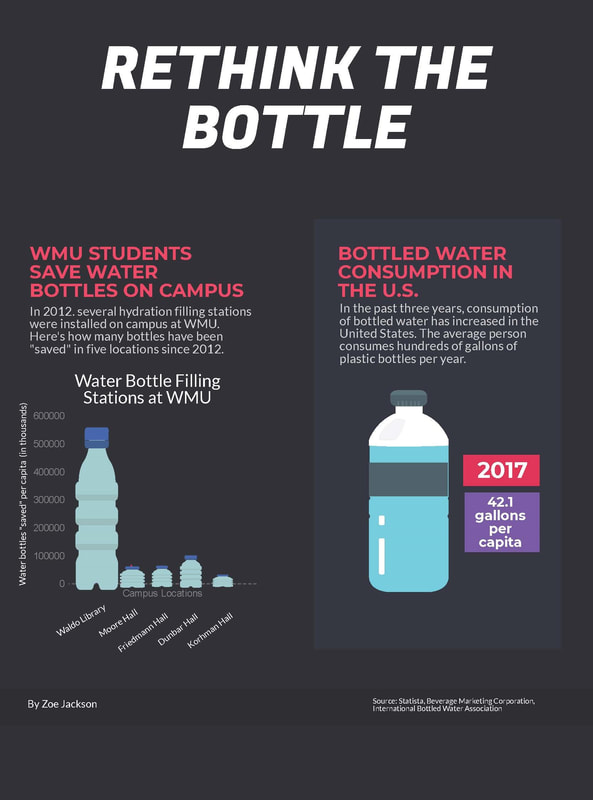 By Zoe Jackson
Sponge, loofah, face towel. Like many people, Western Michigan University senior Helene Woyczesczyk used to use a plastic loofah for her showers. But when she became a member of the permaculture team at the Gibbs House, she learned of another option.

“I heard, through the grapevine, that in 2015 some students planted and harvested these loofah squashes, and I had never heard of loofah squashes,” Woyczesczyk said. “It’s a gourd... and they’re these massive squashes. The ones we have, they're over a foot long, probably three or four inches in diameter.”

This plastic alternative is brown, and is of a fibrous, wiry nature.

“You let them (loofah squashes) grow to full size, and let them dry, and it's this really dense loofah sponge in the middle,” Woyczesczyk said.

The squashes take a long time to grow. The six plants in the garden at the Gibbs House were planted back in February. But the turnout is “glorious,” Woyczesczyk said. Best of all, the sponges work well. Woyczesczyk said she currently uses one of the loofah’s from the first round of planting.

“I know that it works really well as an alternative to a traditional loofah that you could just buy at any big box store, because I have one of the loofahs that was grown in 2015, and I use it every time I shower. It hasn’t broken down or decomposed. It’s so stellar,” Woyczesczyk said. “Honestly I think the plastic ones have a shorter shelf life than this one. This is a totally viable alternative to a plastic loofah.”

Woyczesczyk represents a new generation of the sustainability movement: one that focuses in on reducing and creating, instead of simply recycling. Roger Guzowski, who has worked in the recycling industry for 20 years, said one must know the industry’s history in order to understand today’s culture shift.

“Recycling at its core is nothing more than a manufacturing process,” Guzowski said.

Guzowski started his career at a time where a waste generator would call up a recycling mill to see if there was a need for their stock. Now, there are many more intermediaries between waste generators and recycling companies.

“There’s been a lot of consolidation both in the manufacturing industry, and within the waste industry. There used to be just a lot more small players, there were a lot more direct connections, now most people don’t send anything directly through a mill,” Guzowski said.

The town dump featured in many cities is how recycling began on a large scale, Guzowski said, then it became about how much we could keep out of landfills. Soon, everyone was recycling.

“You had an era where people were legitimately starting to make purchasing decisions based on if something was recyclable or not, and that became a really big threat for some manufacturers of products,” Guzowski said.

Guzowski cited the vilification of McDonald’s for having non-recyclable items, and the shift to praise when some of their packaging became recyclable.

“As that public perception of corporations started to turn, getting your stuff called recyclable meant the difference between whether you sold it or not,” Guzowski said.

Now, Guzowski said the industry has come full circle. The mindset to reduce or create alternatives, is one that many young people are moving toward, like Woyczesczyk or Chase Latka, a WeSustain intern and WMU junior.

Amcor Vice President for Sustainability David Clark spoke on Nov. 9, 2018 at WMU’s Office for Sustainability about recent wins in the industry, such as lightweight packaging, which he said will contribute to less food waste in the world.

“Plastic is lightweight, it’s low cost, it has great barrier properties which means it can keep oxygen out, it can keep moisture in, it can do all these different types of things that protect the food and get it from where it’s manufactured through really difficult supply chains, into grocery stores in cities, and keep it safe and fresh for when people want to use it,” Clark said. “So there’s an important role for it.”

Woyczesczyk said he rejects the misconception that recycling will save the environment.

“A lot of people have this notion that as long as they’re recycling their plastics or their waste, that it's kind of like this net zero cycle where they did nothing wrong. But the fact that they purchased the plastic in the first place meant the demand for those plastics was increased. Really that equates to more plastic in the world, and even if it's being recycled, it's not necessarily always being recycled. There's a huge problem with the recycling system in the U.S.,” Woyczesczyk said.

Clark cited the use of a thin layer of plastic to cover fruit in grocery stores as a positive example of plastic use.

Latka said she disagrees. She said that the movement against plastic use and recycle-focused thinking is where the future is headed.

“I do believe that there is a new wave of people that are dismissing recycling and embracing reduction. The minimalist movement is huge right now and not just for the aesthetic,” Latka said.

Latka said that she tries her best to be an active member of the movement.

“Recycling is good and you should do it, but reducing is the only way to cut down emissions effectively. I think this movement spurred from the science about how terrible the recycling rate is and along with just being educated about how much worse our climate is getting,” Latka said.

The minimalist movement is something Woyczesczyk said she also is interested in. However, she said she rejects those who focus on the materialistic subculture within the movement.

“One of my biggest pet peeves about the sustainability movement is the idea that large corporations have seen that young people are interested in sustainability, and take that to make money. Like the whole straw thing for example. Great, don’t use a straw. But everybody during that time was buying metal straws or durable plastic straws that they can reuse, and I was like OK, but you also don’t need to buy a straw,” Woyczesczyk said.

Instead of purchasing one, Woyczesczyk said people should focus on not using a straw at all.

“But there’s always this idea that large corporations push on us, that sustainability is for sale. That you need to buy certain products in order to be sustainable, and that’s not true.

Sustainability is not about consumerism. That what college students need to know. That you don’t need to buy something in order to consider yourself sustainable,” Woyczesczyk said.

Woyczesczyk said she hopes that those who will consider themselves a part of the sustainability movement will consider eliminating the problem.

“The best thing to do is reduce or eliminate that demand in the first place so companies realize that ‘Oh, I don’t need to put Saran wrap on apples that I sell in the cafeteria.’ There’s too much plastic, and it doesn't matter how much we recycle, buying plastics adds to the huge problem that people think we can recycle away,” Woyczesczyk said.