Plastics and other recyclables go through a complicated
process after thrown into a dumpster on WMU’s campus. 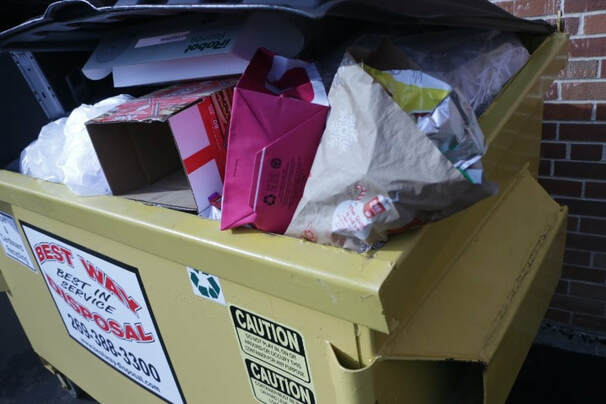 By Adam Rayes
Thinking, Best Way Disposal Sales Manager Steven Graffenius paused for a moment, and then clicked his tongue.

“We’ll worry about it when the time comes, I guess,” he said flatly.

In a July 2017 World Trade Organization filing, China announced a policy, called “National Sword,” that would become a crisis for the American recycling industry.

China has been responsible for buying 45 percent of the world’s recyclable plastic since 1992, according to a June 2018 study in the journal, Science Advances. This study estimated that 111 million tons of plastic will be displaced by 2030 because of this policy.

Simply put, the policy severely limits the types of recyclables China is now willing to buy.

“Ultimately it’s going to affect all recycling companies,” he said. “Eight hundred million tons of material. You can’t get shut off and expect changes not to happen.”

Although the policy has not really affected Best Way’s business yet, Graffinius said.

“You have to have an end user,” said Sarah Hill, associate professor in WMU’s Institute of Environment and Sustainability. “The only reason you recycle is because you are going to turn that garbage into material or feedstock for industry.”

China’s large manufacturing efforts poised the country to take a lot of recycling, she said.

Plastic Journey
On a Friday in late November 2018, a garbage truck picks up a dumpster outside of Ernest Burnham Hall at Western Michigan University in Kalamazoo. The truck unloads the waste into its hold.

This is the beginning of the journey for recyclables on WMU’s campus. The dumpster is a specially marked as a “single stream” dumpster, which allows most recyclables to be combined into one waste stream. The garbage truck belongs to Best Way, the company that holds WMU’s recycling contract. 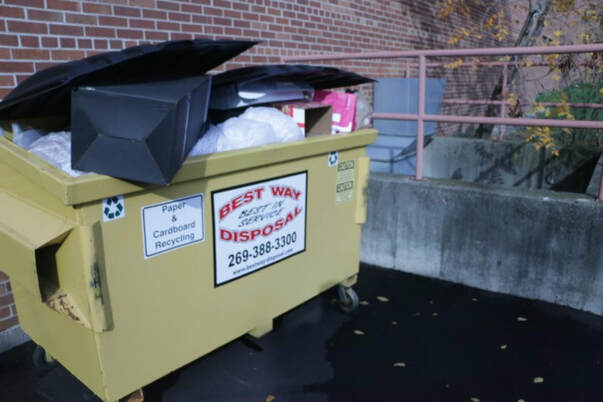 Best Way has provided services to WMU for 14 years, long before the university officially switched to single stream, Graffenius said. And Best Way had no reason to hesitate because of the change, he said.

“We were doing commingle for quite a while,” Graffenius said. “So, it was not a big change for us.”

On Miller Road, just 14 minutes away from campus, Best Way’s transfer station is the waste’s next destination.

“We dump the material, we load it into semis and we take it to a material recovery facility out of state,” he said.

The waste makes a 55-mile trip to a place called Recycling Works in Elkhart, Indiana, owned by a company called Waste Away Group. The goal of a material recovery facility (MRF), like Recycling Works, is to sort recycling and then sell the reusable waste to various companies that break it down into raw material and then sell that material to manufacturers.

For Best Way, the process seems fairly straightforward: pick up and then deliver. However, Graffenius is still concerned about how National Sword will affect future business.

“Now that (coastal U.S. recycling companies) can’t ship it out, they’re looking into the United States to get rid of their product,” he said. “So now the market is going to be flooded. It’s a commodity market, so the commodity prices are going to drop. Overall, the cost is going to increase. It’s just a question of time.”

Best Way has been selling its recyclables to Recycling Works for about four or five years, Graffenius said.

Best Way’s trailers, he said, deposit recyclables onto a “tipping floor.” From the tipping floor, recyclables get tossed into an 80-yard bin with a rotating drum at the end of it. The drum uses spikes to place material onto conveyor belts in an “even flow.”

As the waste goes through the conveyor belts, Recycle Works employs several sorting techniques. Two magnets, one designed to “push” and the other to “pull,” sort iron and aluminum out of the stream. Workers pull “contaminants” off the line by hand.

Contaminants are pieces of waste that cannot be recycled; Kennedy used garden hoses and bowling balls as examples. This also includes waste made from recyclable material that has some kind of substance on it that contaminates it. Which is why pizza boxes, despite being cardboard, cannot be recycled.

“Some people think that if it’s made of plastic it can go in,” Kennedy said. “Like a garden hose, a big tarp from (their) backyard or Styrofoam.”

Recycle Works has about a 10 percent contamination rate, Kennedy said.

Human workers also pull cardboard and “mixed rigid plastics,” like buckets, off the line by hand because of their size, he said.

A “paper screen” then separates paper products from the rest of the stream by having the paper “ride on top” while everything else falls through, Kennedy said. An “optical sorter” uses a spectrometer, which detects the components of the waste using beams of light, to separate plastics like water bottles automatically. Plastics like milk jugs, detergent bottles and small plastic containers are sorted into separate bins by hand.  Residue and nonrecyclable waste go to a trash compactor at the end.

Each MRF is uniquely designed specifically for the waste streams it services, Kennedy said. Some are more automated, some are less. Recycle Works services single stream consumer waste from northern Indiana and southern Michigan for the most part, he said.

“There are some similarities (between MRFs),” he said.

After processing the waste, the material gets baled up and sold.

“We like to keep it as local as we can,” Kennedy said. “So, the paper and cardboard get sold to mills in the Midwest, most of our plastic stays in the Midwest, but sometimes it goes to the East Coast.”

Despite Recycle Works’ choice to sell locally, the business was negatively affected by China’s National Sword, he said, especially for newspaper waste, at least for a time.

“When China quit taking material there was as many as 100 million tons a month of newspaper that used to go to China that stayed in the United States,” Kennedy said. “There was a period of time where it was really challenging to sell newspaper (waste).”

The company pushed through by adding labor and extra steps to ensure that the product was clean in order to make the MRF’s output more desirable. Despite their efforts, there were some periods of time where Recycle Works wasn’t able to sell its product.

“We sat on it,” Kennedy said without hesitation. “I can’t speak for other places, all I know is that we work real(ly) hard at managing the public’s perception that the material that they send to be recycled is recycled. There was no way we were going to landfill material.”

Kennedy said he thinks everything will work out. Although newspaper and some plastics, like small plastic containers, plastic bags and rigid plastics, get sold at a loss sometimes.

“(Newspaper) went from selling 80 bucks a ton, over (the) course of months, to minus five dollars a ton,” he said.

Single stream was highly demanded by Kalamazoo’s residents, according to the city. After some research and a contract with Republic Services, the city gave in.

“We’ve pretty much doubled our participation for our community,” said Wendy Burlingham, administrative support manager for the city of Kalamazoo’s Department of Public Services. “It’s been very well received and implemented.”

Michigan State’s MRF
About 80 miles away from WMU’s campus in Kalamazoo is a very different kind of MRF.

Michigan State University has its own processing facility. Their MRF is smaller and mostly labor based, said David Smith, recycling coordinator at MSU’s Surplus Store and Recycling Center. It also is not (primarily) single stream.

“Technically I suppose you could say it’s single stream, we can handle single stream stuff,” Smith said. “But that just requires a lot more sorting and more labor time. We try to keep it separate as possible on campus.”

In the fight against contamination, split streams have helped this MRF stay ahead, he said.

“It also gives us a much better-quality product that we produce,” Smith said. “In 2017 we were at 3.27 percent out-throw rate from our MRF.”

“Out-throw,” he said, refers to non-recyclable or contaminated waste that needs to be thrown out.

Even with a lower contamination rate, MSU’s MRF is still seeing a lot of the same “National Sword” issues that Recycle Works has been experiencing.

“(Material sales) all stay here in the Midwest states,” he said. “But, that being said, the restrictions that China has placed has had a ripple effect all across the country.”

The policy does more heavily affect US coastal recycling companies that marketed their product to China, Smith said.

“Nevertheless, that material that was going to China is now staying domestic,” he said. “It’s basically caused a glut in the market.”

Because of the flood of recyclables into the U.S., prices have gone down, Smith said.

“It’s crazy to me that a couple years ago I was getting $50, give or take, a ton for mixed paper,” he said. “And now the market is so bad that we actually have to pay to get rid of our mixed paper.”

“I wish I had a crystal ball,” he said thinking about how China’s policy will affect the MRF in the future. “I think most people are going to tell you that we’re going to see a slow increase, but we’ve thought that before. It’s like asking, ‘What do you think the weather is going to do here in Michigan in a week?’”