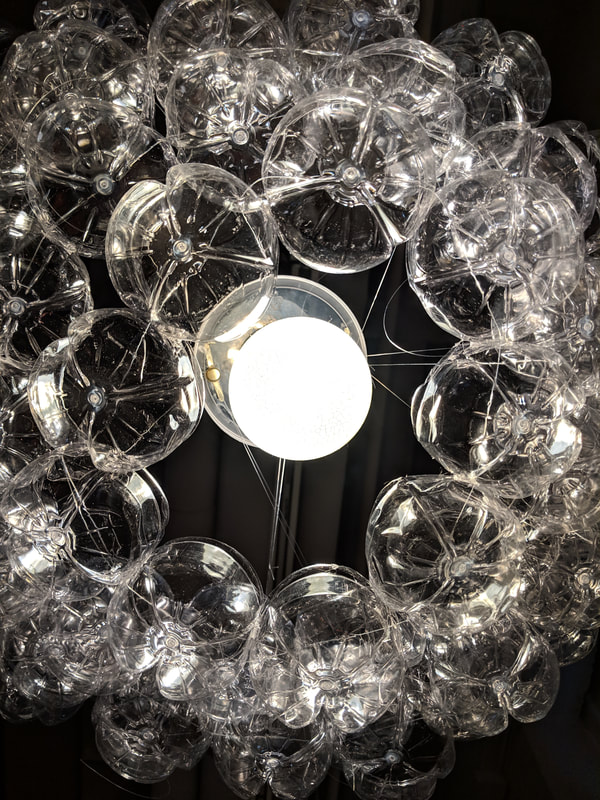 By Mikhayla Dunaj
Western Michigan University Interior Design Major Emily Schatz sat at her dorm room desk in French Hall at 2 a.m. on a Monday night clipping apart hundreds of water bottles she had collected over two months. She let the scraps fall and blend into the grey, fuzzy rug in her room as she saved the bottom of each water bottle. After stringing together three different-sized circles of bottle bottoms, Schatz completed the first prototype of a project she had been planning since her first year of college.

Schatz, a junior, is one of six students who selected plastics as the material of choice for WMU’s lighting and color interior design class. The class assignments instructed students to create a luminaire out of recycled materials. This is the eighth year that Beth Rolston Jarl, a faculty specialist who has taught in the interior design program at WMU for 10 years, has assigned this project.

“The idea was to take something that was already out there that would have maybe ended up in a landfill and repurpose it into the material for your luminaire,” Jarl said.

The students are given a sock and cord unit and are allowed to use new fasteners to hold their final pieces together, but the rest is up to them, Jarl said. Each year, she focuses the assignment around creating a luminaire and “creating interesting shadow and light and selecting the lamping.” In the two to three weeks that follow, students piece together their luminaires along with a story that describes their source of inspiration.

“Sometimes, I give a criteria like I did this year, which is recycled product, and then have them tell their story around it,” Jarl said. “We really try to focus on sustainable materials. We get to know the students pretty well. Students, over the time they are here, have me six times. This is probably the fourth time they’ve had me as an instructor. So I kind of know the students, and I thought they would embrace that criterion.”

Schatz was inspired to use plastic water bottles because of her consistent daily consumption of them. Living in the residence halls, she said she only drinks from plastic bottles.

“I always recycle them, but I started saving them so I could build the luminaire,” Schatz said. “I don’t trust the water here. I don’t think the campus’ water is clean, and I think that’s been proven.”

Schatz said she has lived in French Hall for two years now and both years maintenance staff have installed Brita water filters into the faucet because of previous issues with water quality, something she compared to the recent Flint water crisis.

“I was inspired by Japanese Cherry blossoms, which represent peace, hope and revival,” Schatz said. “Those three adjectives have served as a symbol for the Flint water crisis with people donating millions of plastic bottles to the people of Flint. They have to use those for cooking, bathing, cleaning — everything.”

Schatz’s final project is made of 90 water bottle bottoms held together by fishing string connected to a plastic yogurt top that holds the light bulb to create a pendant-style fixture.

Schatz said that according to her research for the project, only 10 percent of water bottles are recycled.

“We have to think about where they are going,” Schatz said. “These water bottles can be used to create luminaires or art work, giving them more value. I used 90 bottles and it barely made a dent. I probably had 300 bottles, and I only used 90 of them. It’s pretty eye-opening to see that I used those. That was all me.”

Schatz is not the only student who became more aware of their consumption of plastic products. Junior Nicole Jenkins focused on plastic bags to make a table lamp resembling coral out of plastic bags.

“I used plastic bags,” Jenkins said. “I got the idea because I work at a grocery store as a cashier so I use a ton of plastic bags, and we waste a lot. We have a little recycling unit outside, and (we) barely get any of them back.”

Curious about where all the plastic bags eventually end up in the ecosystem, Jenkins said she found out that plastic bags interfere with the life of coral when they enter bodies of water.

Jenkins took 36 plastic bags from the grocery store where she works and layered them together in sets of 12 and ironed them.

“I cut the label off the plastic bags and just used the white part, ironed four sheets together, and then took another set of four sheets that I had and melted them into sheets,” Jenkins said. “Then I laid them out flat and cut the shape that I wanted. For the base, I used an old container that I had already wrapped in another blanket of sheets I had created. Then I glued the other piece I’d cut out on it.”

Jenkins said the project has not changed her consumption patterns because she already was aware of how many bags were being wasted at work, and she personally made the effort not to use them anymore even before the project had been assigned. 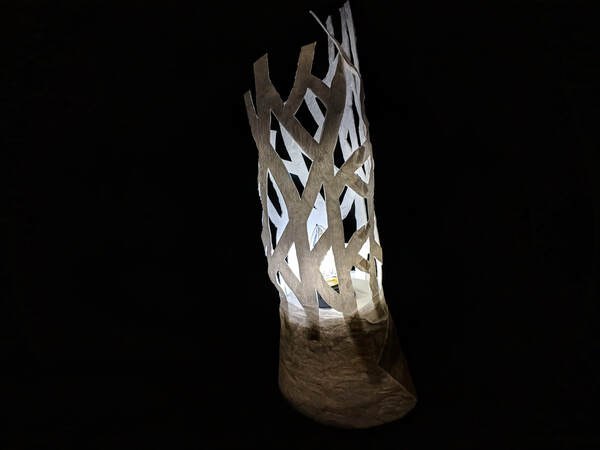 Another WMU student, Chelsea Haverdink, also was inspired to make a light fixture from materials found at her workplace.

“I used plastic spoons,” Haverdink said. “I honestly looked at different pictures of things we could do, and I saw a spoon and it made sense because we use all plastic utensils at the job that I work at.”

Haverdink took approximately 80 spoons from work and melted them onto metal strapping and an old lampshade structure to create a pendant fixture.

“I was inspired by trash island and all the species that could [be affected],” Haverdink said. “Those could possibly end up being jellyfish and sea anemones. I was also inspired by the way light travels through water. That’s what I wanted my shadow to portray.”

Haverdink said her research focused on the Great Pacific Garbage Patch located between California and Hawaii. The patch is twice the size of Texas with 1.8 trillion tons of waste accumulated in just under 30 years, Haverdink said.

“When I got to work after we turned this in, there was a brand new box of like 500 plastic spoons and plastic forks,” Haverdink said.

Although she said she did not use plastic utensils at the credit union she worked prior to the project and did not make a personal consumption change, she said she is driven by the information she learned about the garbage patch.

“The things that are ending up in landfills and bodies of water, there’s different ways we can reuse them and revitalize them other than killing our planet,” Haverdink said. “That’s what all of our projects do: upcycle the materials that are ruining our planet and plaguing it. These are all just examples of small, small, small steps we can do to change our consumption and the death of the Earth.”

Information about the garbage patch originated in Jarl’s class as a discussion about “garbage island.”

“I liked that the students kind of ran with that idea,” Jarl said. “Sometimes you just mention something and it’s all you need to do and the students will take off. I think we got some good solutions. I’m always excited to see what students come up with. And I always like to see how passionate they are about their ideas and executing them.”

Jarl said she tries to encourage her students to talk about sustainability a lot.

“The number one energy consumer in our world is a built environment,” Jarl said. “Between housing and commercial buildings, that’s where our carbon footprint comes from. People think it’s cars, but number one is the built environment — everything from industrial buildings down to someone’s 750-square-foot home. All of those things contribute. The second is from cattle production, and third is automotive. I try to get the students to focus on that in our

materials (class), and I also bring it up in (the) business practices (class).”

While she said she will change up the project criteria next year, Jarl said she is hoping students will finish their work on the luminaires.

“I thought that would make a good conversation, and it has worked out really

well,” Jarl said. “Usually what I end up with is prototypes of what could be produced. I suggest that they go and take it a step further and finish them up or make improvements.”